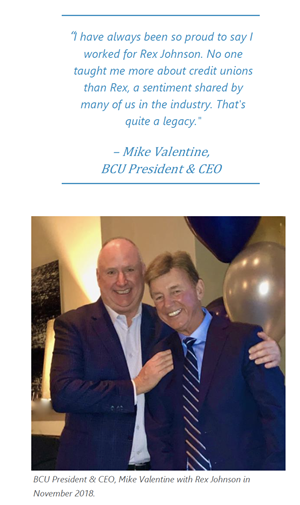 It's with great sadness that BCU announces the passing of our founding President & CEO, A. Rex Johnson. Rex passed away peacefully on Friday, April 2, 2021, surrounded by his loving family. He was 77 years old.


Rex had a larger-than-life charisma that brought the entire credit union industry together. His leadership inspired us to live the ‘people helping people’ purpose and, as Patch Adams says, "see what no one else sees" when serving our members. Johnson took the helm in 1980 to start a credit union for Baxter employees and their families and lead the merger between American Hospital Supply and Travenol Employees Credit Union. The resulting Baxter Credit Union (BCU) was chartered in 1981. Under his leadership, BCU became the fastest growing credit union in Illinois, reaching $300M and 72,000 members in just over a decade. Rex then founded Lending Solutions, Inc. (LSI) in 1994. Johnson is an Illinois Credit Union and CUES Hall of Fame inductee. He received CUNA's prestigious Phil Greer Lifetime Achievement Award in 2017.


"I have always been so proud to say I worked for Rex Johnson," said Mike Valentine, BCU President & CEO. "Following his lead as BCU's CEO is something I'm extremely humbled and honored to have been given the opportunity to do. No one taught me more about credit unions than Rex, a sentiment shared by many of us in the industry. That's quite a legacy."


In addition to his family, all who had the good fortune to work with Rex will feel a tremendous loss. His smile was one of a kind, and he had a kind word for everyone. Rex stressed the importance of the work credit unions do to change their members' lives for the better and encouraged us to have fun doing it. We will cherish and celebrate the memories and stories he gave us. He had an indelible impact on BCU, and his spirit lives on in everything we do.


To honor Rex’s memory, BCU will award a $5,000 Leader of Tomorrow Scholarship in his name. The credit union’s annual scholarship program re-opens April 26, 2021. BCU also made a donation to the Cure Alzheimer’s Fund.

Please consider joining the quest to find a cure for Alzheimer's Disease. To make a donation in memory of Rex, visit www.curealz.org.