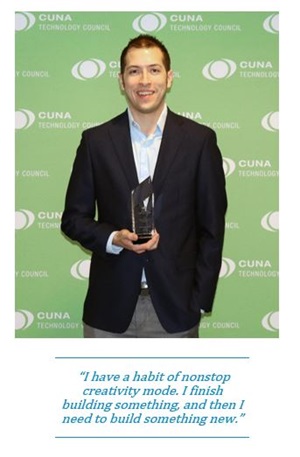 The CUNA Technology Council honored BCU’s Operations team with the Excellence in Technology Award, Best of Show, at the annual conference in San Francisco, California.


“There are two steps to my job,” Dzyacky said. “I find something people don’t like to do, and I get rid of it.”


Since 2016, Dzyacky’s simplistic approach has saved BCU’s IT department approximately 10,500 hours working on Incidents and Service Requests, and allotted more time spent on business objectives. Some of the most common forms of automation have been integrated through BCU’s Service Desk. Employees are able to reset their passwords, submit a ticket, update their account, and manage settings through the automated portal.


“Adam is a rock star and a true industry leader,” Jeff Johnson, Senior VP and CIO said. “His contributions have been invaluable to the IT function and the organization as a whole.”


The automation processes at BCU continue to expand to departments outside of IT. Nearly one third of the hours saved in 2018 were linked to Human Resources. New scripting in automation allows the HR department to consistently and accurately process time off requests and verify employment statuses. As the automation at BCU matures, Dzyacky’s team hopes to minimize the need of any manual technical work. By cutting back on administrative tasks, employees at the Credit Union are now able to better serve members.


“I have a habit of nonstop creativity mode. I finish building something, and then I need to build something new,” Dzyacky said. “I constantly want to push the envelope and one-up myself.”


For Dzyacky and his team, the award has been over two years in the making. However, it’s not the first time BCU has been recognized for Excellence in Technology. In 2016, BCU also received CUNA Technology Council’s Best of Show.


Led by Jordan Mueller, Senior Manager of Program Delivery, and Brian Kaminski, Director of IT Project Management Office, the team was acknowledged for their project and portfolio management tools.


As the technology systems at the Credit Union improve, BCU intends on meeting their aggressive performance goal of seventy percent of time spent on business projects, and thirty percent spent on support and employee net promotor score (eNPS).